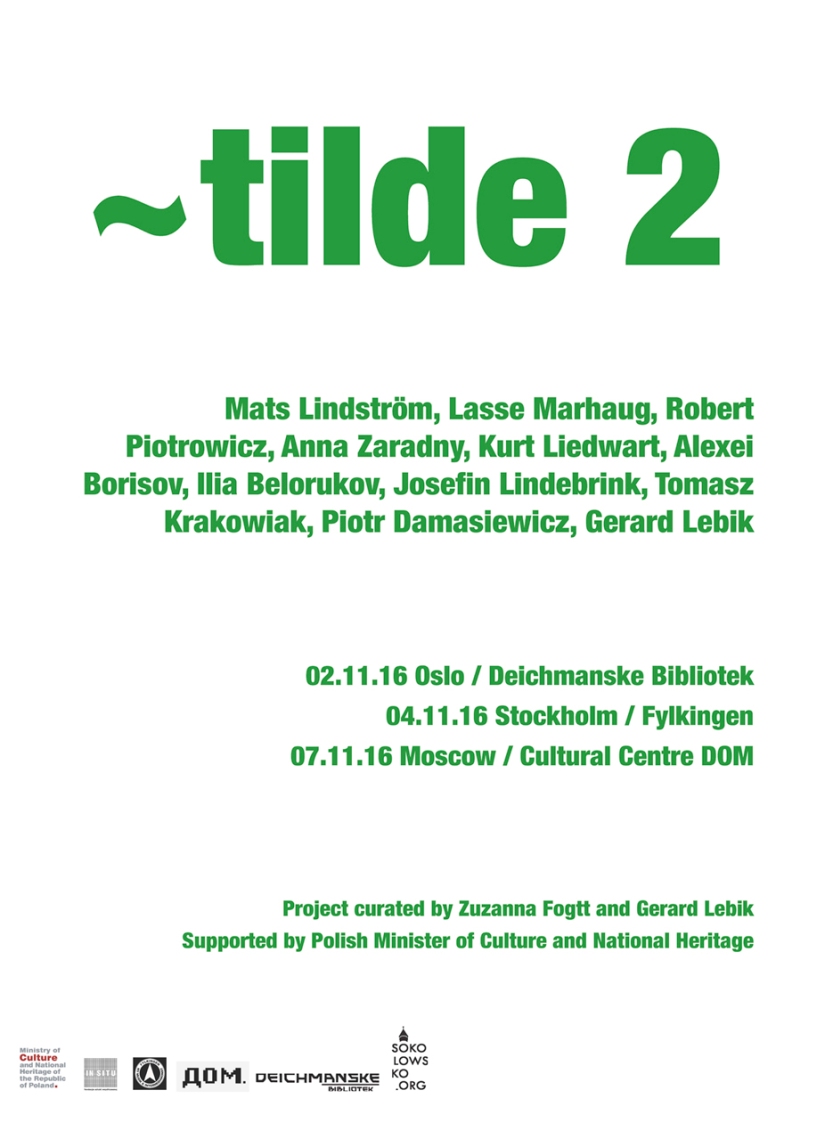 ~ tilde 2 is a network for experimental music initiated by Polish sound platform Sanatorium Dźwięku, aimed at creating possibilities for cooperation between musicians from the Baltic countries, leading to lasting relationships in the field of culture and developing dialogue between artists working in an experimental contemporary music context. Over a 3 day period, Tilde II will invite artists from Poland, Sweden, Norway and Russia.~ tilde 2 will be held in three cities, Moscow, Stockholm and Oslo. It is the continuation of the project Tilde I, a Polish experimental music networked ensemble work in collaboration with Scandinavian artists that culminated in a presentation of a broad spectrum of electroacoustic improvised, electronic, and contemporary music. Concerts by artists such Robert Piotrowicz, Krzysztof Knittel, Gerard Lebik, Piotr Damasiewicz, Martyna Poznańska were preceded by lectures about the Polish Radio Experimental Studio, an historically important collective active during the 60s, and one of the most important nodes of contemporary experimental music curated by Michał Libera.

These artists will collaborate on developing new tendencies of experimental music in important venues like Fylkingen, Stockholm and DOM, Moscow.

He has authored radio dramas, sound installations, and music for theatre productions, and collaborates regularly with other artists on audio-visual performances. As an instrumentalist, Piotrowicz works mainly with his own live performance setup, developed around the electric guitar and analogue modular synthesiser. His music has as much in common with contemporary electro-acoustic compositions as it does with sound art. His concerts feature saturated, detailed musical forms created with analogue synthesizers and computers. He has developed his trademark sound of intense dynamics seized in dramatic and balanced structures.

Sound and visual artist, composer, improviser. As a composer and instrumen- talist she works in a wide spectrum of genres: from acoustic improvised mu- sic with a contemporary minimalist language to the complex structures of experimental electronic music compositions. As a visual artist, Zaradny cre- ates in various media including installations, objects, photography and video. The artist uses abstraction, micro sound and architectonic elements, lights and space. Her pieces are marked by the ambiguity and the relationship be- tween medium and ideas.
The winner of audience art prize, Deutsche Bank and Zachęta National Gal- lery of Art “Views 2011”. Co-founder of the Musica Genera Festival and the Musica Genera label.

Zaradny’s works have been presented in festivals and exhibitions all over the world, the last ones so far at: Museum of Modern Art in Warsaw, SiILBERKUPPE, Berlin, Kunst-Werke, Berlin, Sottovoce, London, What is music? Festival, Sydney, Melbourne, All Ears Festival, Oslo, Unsound Festival New York, Exploratory Music From Poland Super-Deluxe Tokyo, Japan

The discography of Anna Zaradny includes solo recordings and collaborative projects with a.o.: Burkhard Stangl, Tony Buck, Robert Piotrowicz, Kasper Toeplitz, Cor Fuhler. She is also author of music for theatre plays and multimedia projects. She is co-founder and curator of the Musica Genera Festival.

Piotr Damasiewicz – born in Wroclaw, is a composer, trumpeter, multiinstrumentalist, music curator. Apart from musicians, the association gathers people from the world of fine arts, who are open to a mutual dialogue.. He collaborated as well with the artistic circles of academies of fine arts in Wrocław and Katowice as a co-author of various multimedia projects. He cooperate as a curator in multicultural Festival Art Meeting, and art platform Melting Pot (Wrocław). He reaches down to the language of jazz, moving towards the free jazz ideas, through the European classical music, all the way to the achievements of the new modern music, including the European improvised  music, sound art, electroacoustic improvisation, experimental music. He had opportunity to work with Polish-German cooproduction of Avant Art Festival, Gerngesehen and Mex, Europeans musical platforms JazzPlayesEurope 2010, Take Five European Project 2013, European Jazz Network. He took part an international improvised music summit mixing leading players from Styria in Austria with a wide range of top-draw musicians from Wrocław / Poland.

Is a composer focusing on live electronics. He often works
with intermedia, scenic elements and visual arts as a complement to the
music, and has worked with music for theatre, radio, dance and sound
installations. Mats Lindström’s 2008 album МИГ was released on Edition Mego
sub-label Ideologic Organ, curated by Sunn O))) member Stephen O’Malley.

Mats Lindström in an director of prominent  EMS  a studio for the research and development founded in 1964 in Stockholm.

Has since the early 1990s been one of the most active artists in the Norwegian noise/experimental music scene. As a performer and composer he has contributed to well over 300 CD, vinyl and cassette releases over the years, as well as extensive touring and performing live on all continents of the world. In addition to his solo work, Marhaug has collaborated with several artists in the fields of noise, experimental, improv, jazz, rock and extreme metal, as well as working with music and sound for theatre, dance, installations, film and video. In the mid-90s Marhaug started TWR Tapes (still going) and Jazzassin Records (ended 2001). In the 2000s he started the record labels Pica Disk and Prisma Records. In 2011 he started his own print publishing called Marhaug Forlag. He has also been active as an organizer, promoter and producer. Marhaug was born in the northern regions above the arctic circle of Norway, but currently lives in Oslo

Is a swedish acoustician, sound artist, and independent researcher primarily concerned with perceptual studies of acoustic environments. Through acoustic modeling (auralization), spatialized sound composition and field recording her body of work aims to explore the connections between auditory sensation and the experience of space.

In addition to acoustical design of built space she trains architects, acousticians, audiologists, performance artists and musicians in acoustics and studies of auditory perception. She is a frequency lecturer in acoustics at the Royal Institute of Technology, Stockholm, Sweden. With a background in audio electronics, engineering and music she later obtained a Master’s degree in Sound & Vibration at Chalmers University, Gothenburg, Sweden.

Various recordings released on his own Mikroton Recordings as well as on Intonema, Hideous Replica, Copy For Your Records and so on.

Is a musician from Saint-Petersburg, Russia. He works in the direction of improvised, noise and electroacoustic music. He’s a member of different projects such as Wozzeck, Mars-96 and others. He collaborates with musicians who work in other genres (from hardcore and metal to academic contemporary music); with dancers and painters; with theater. Ilia practices an experimental approach of sound extraction on alto saxophone with objects, uses laptop, electric-guitar and other instruments. Also he is a founder of Intonema label (www.intonema.org). Organizer of events in Russia, co-organizer of the Teni Zvuka festival in Saint-Petersburg, writer of Contemporary Music magazine (www.cmmagazine.tumble.com).

Has made music since the underground movement ignited in Russia in the beginning 1980s, and is known as a member of Night Prospekt, F.R.U.I.T.S., Volga, ASTMA, Fake Cats Project and among many other projects.

Born in Moscow on December 7, 1960, Borisov graduated from the Moscow State University where he had studied History and Arts. His controversial performing career (as a guitarist) began in the Center new-wave group, in 1980. Next year, he formed the Prospekt mod-band, and re-modeled it in 1985 as the shifting Night Prospekt with then-partner Ivan Sokolovsky. After the dissolution of the band in the beginning 1990s, he surfaced then in the “noise reconstruction and techno acoustics” duo F.R.U.I.T.S. with Pavel Zhagun (also known as Piezo) and in various short-lived art/noise/industrial acts Like Joint Committee, Atomic Bisquit Orchestra And Sever.

He and his previous associate, the experimental Finnish sound-sculptor Anton Nikkila, established in 2000 their own N&B Research Digest label.

Among his other collaborations are the joint projects with the performance-group “North” (Russia), KK Null (Japan), Jeffrey Surak (USA), Leif Elggren (Sweden). Borisov also collaborates with the video-artist Roman Anikushin, multimedia-artists Aristarh Chernishev and Vladislav Efimov and also with Olga Subbotina, Moscow theatre director. Lately Borisov prefers solo music career. He also works as a DJ in clubs and on radio and contributed as a journalist to some Russian (“Bulldozer”, “Ptjuch”, “Fuzz”, “Downtown”, “man’Music”, etc.) and foreign (“B’Mag”, “Technikart”) magazines and newspapers.

He is portrayed in the 2013 music documentary Elektro Moskva. Alexei Borisov in January 2015 founded Fake Cats Project with Igor Levshin and Kirill Makushin.

Project supported by Ministry of Culture and National Heritage of Poland, Polish Institute in Stockholm in cooperation with IN SITU Contemporary Art Foundation – Sokołowsko Poland.